How to Compare Stone Restoration Quotes 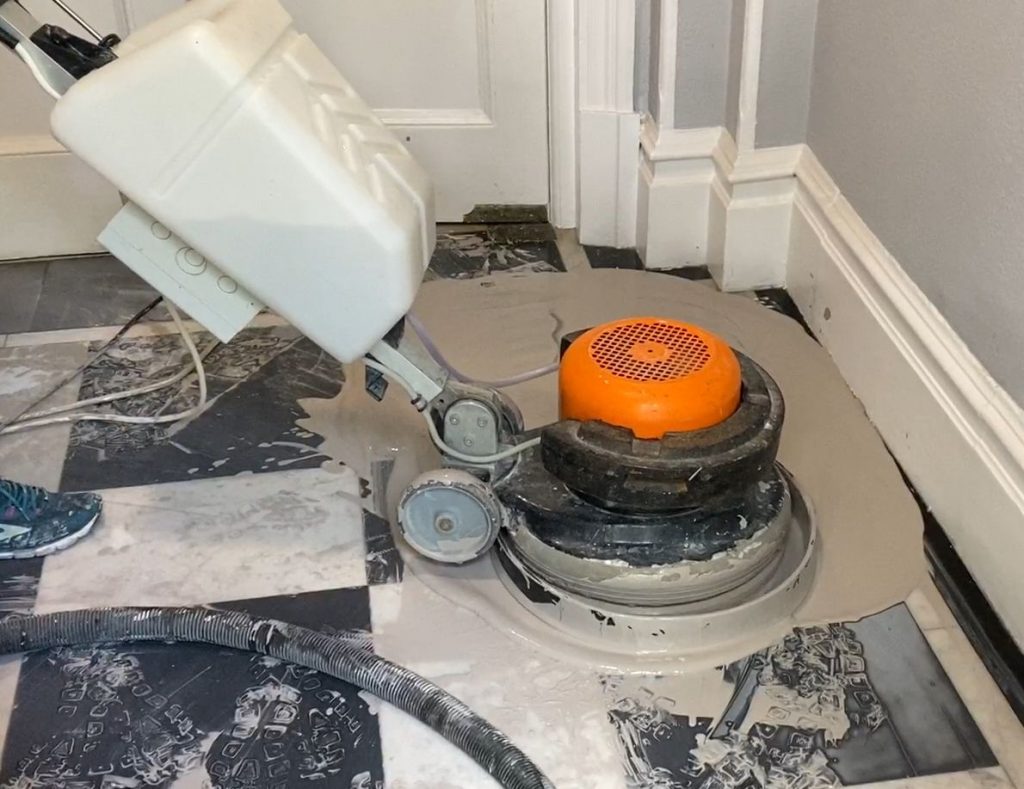 Your stone floors are looking somewhat dirty and scuffed because you haven’t had your floors cleaned and restored for a few years. You search on Google and post a request on Facebook or Nextdoor and the next thing you know, you have a list of stone restoration specialists but can’t decide how to choose the […]

How to restore Slate Tiles 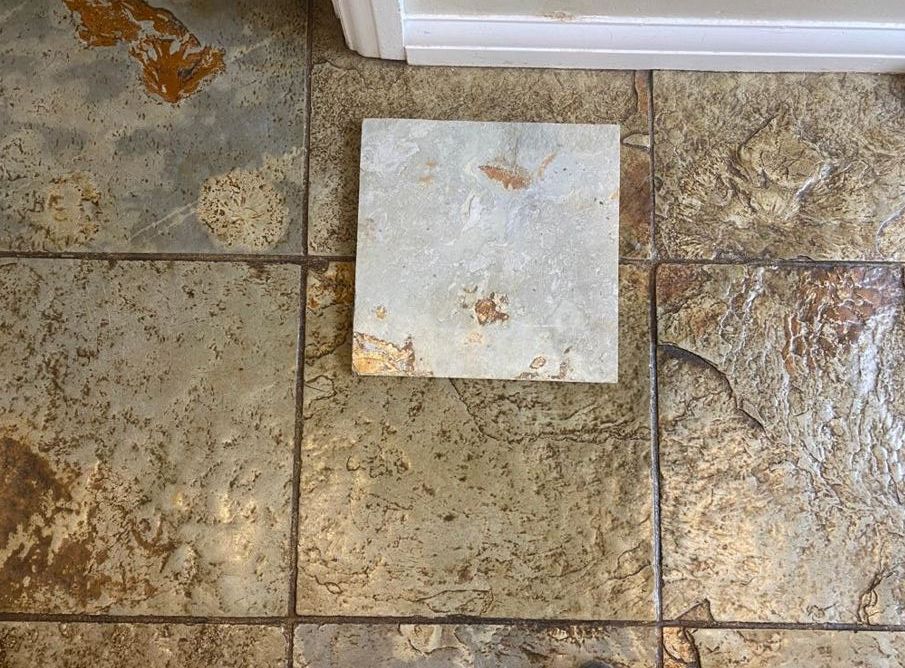 Despite the fact that slate floors are well-known for their beauty and long-lasting durability, the sealers and waxes that are applied to them over time can darken their appearance or cause dirty-looking spots. If the sealer is waxed over, dirt will become trapped in the sealer. It is possible that some areas of the floor […] 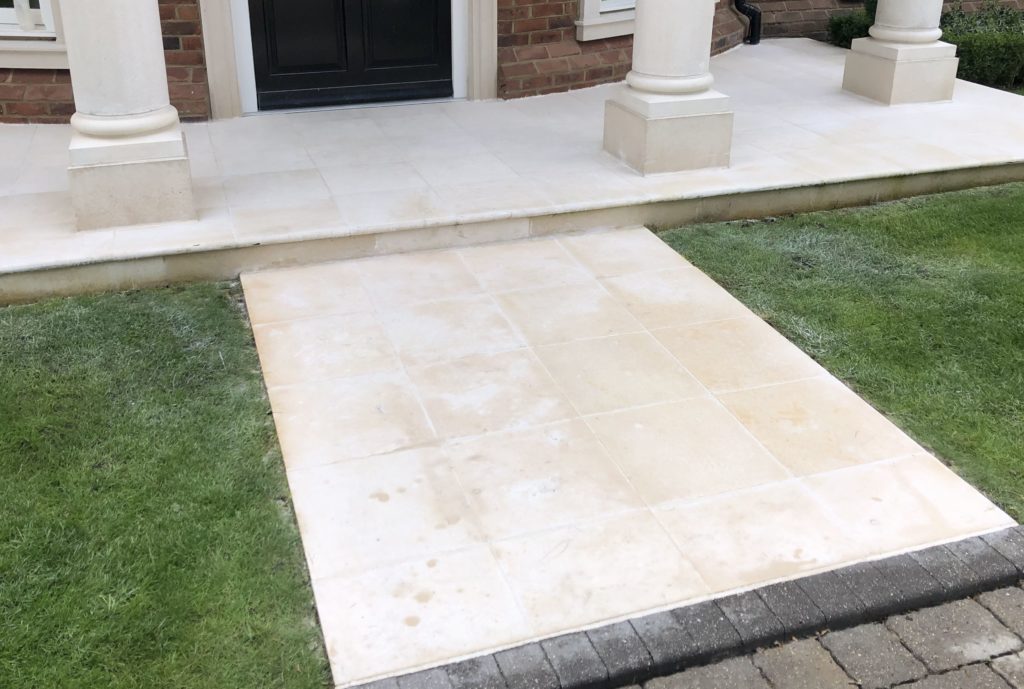 Have your stone pavers ever been stained by orange residue from lawn fertilisers? I bet you’ve tried using a power jet-washer or scrubbing brush, but still couldn’t remove the stains! This happens a lot and we are often asked how to remove the stains from patio pavers.    The stains haven’t ruined the limestone pavers […] 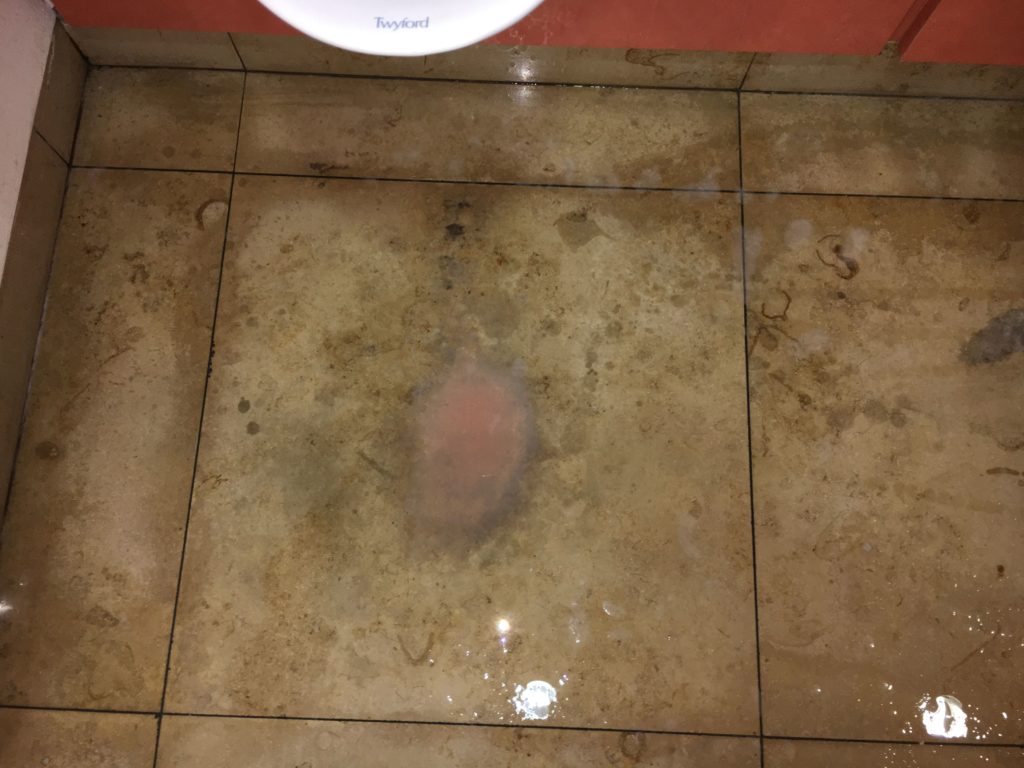 Because urine is slightly acidic, it’s not a good idea to have urinals in a bathroom that consists of limestone floors. This is because the stone consists of high concentrations of calcium which becomes etched when coming into contact with an acid. Here we have an office block in Bracknell where we sanded down the […] 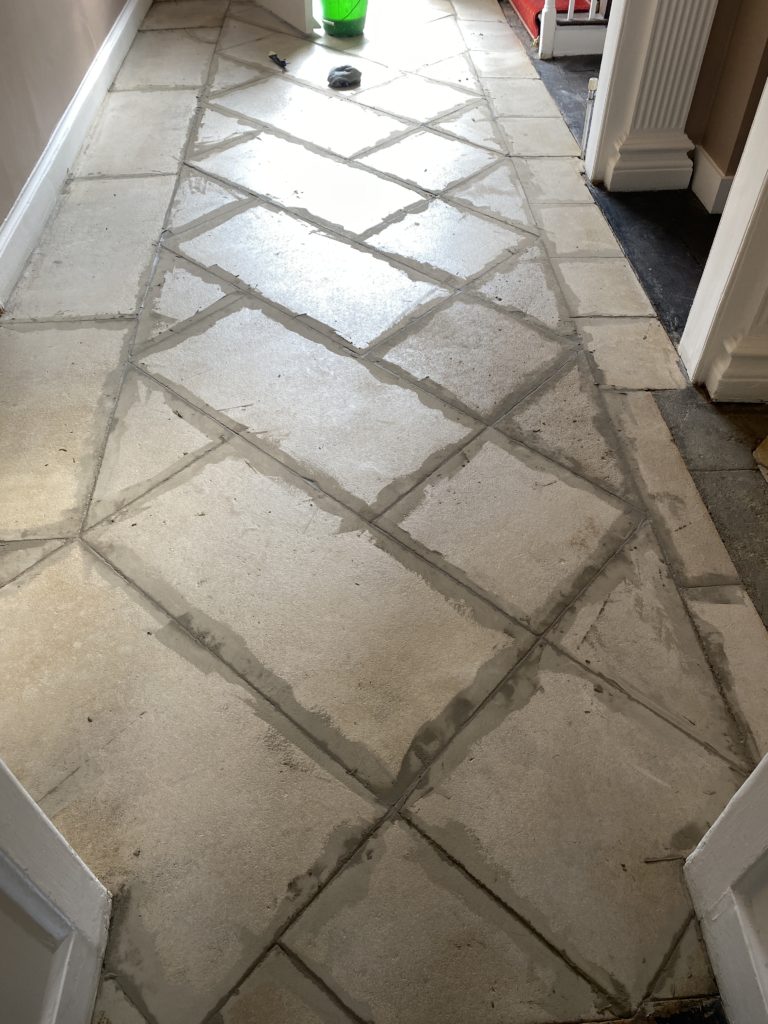 This is the toughest limestone on the planet, it’s almost as hard as concrete and near impossible to sand with our machines. This old floor had a previously had a carpet glued on top of it and the new owners of the house wanted to restore the blocks of stone rather than cover or replace […] 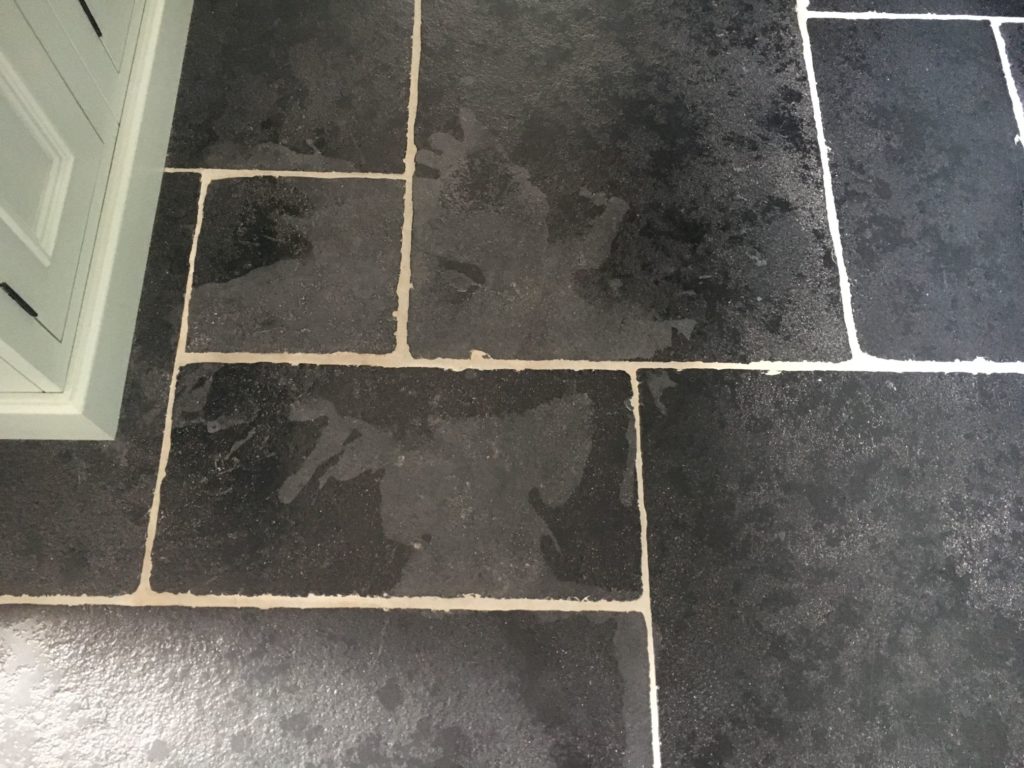 It takes only a few seconds to ruin the surface of a limestone floor. As soon as the acid lands on the stone it’s already too late. no matter how fast you are at cleaning up the spillage. This is because limestone is made from a high concentration of calcium due to the animal fossils that have […] 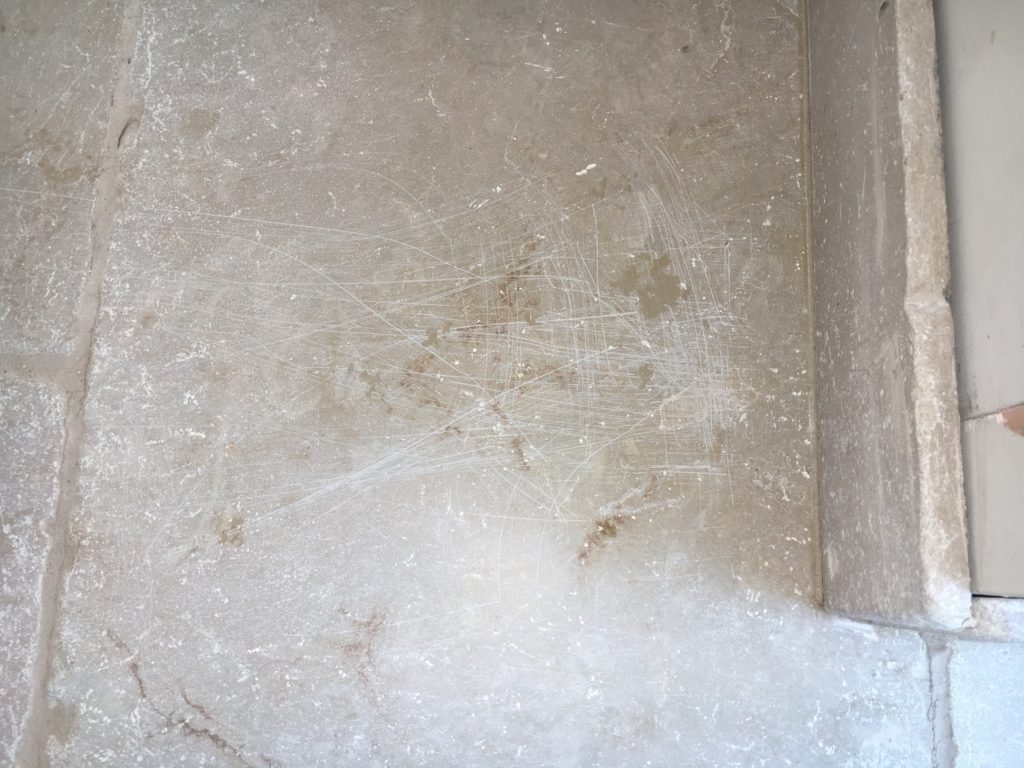 This is what happens when your little grand children come around for tea. If you don’t have any paper and crayons around then sure enough the little ones will find a handy metal tool to scribble with, and what makes a better notepad than a soft limestone floor! It took about 15 minutes to remove […]

Stone tiles are too shiny

When a customer buys a stone tile that’s produced with a honed surface, it is most likely by choice because she does not want any sun or images reflecting from the surface.   One such customer had installed into her home over 150sqm of large tiles but they were laid in such a way that […] 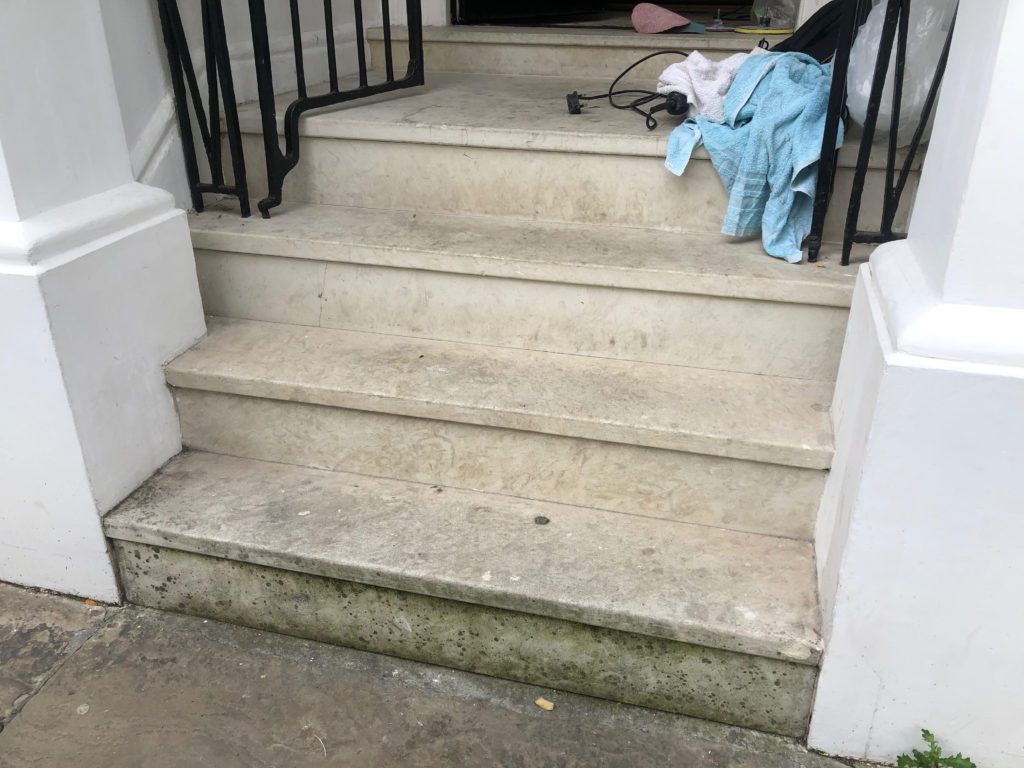 We spent the day in Hampton, Greater London, to restore this set of limestone steps which had many years of dirt, chewing gum and very deep scuff marks. It’s difficult to show the results in the picture so to explain, the steps had previously been very rough with many scratches and deep stains. Once restored, […] 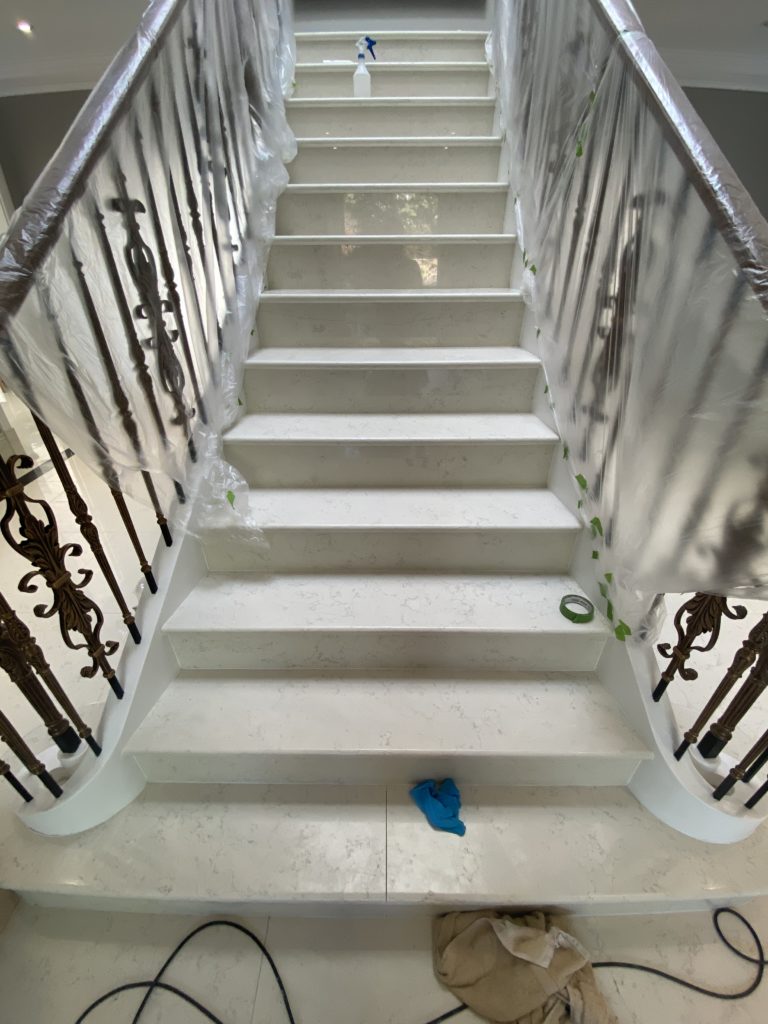 Polishing a limestone staircase takes a lot of preparation to protect the surrounding furnishings before work can begin. This was a very messy job but we first covered the railings with plastic sheets in order to create an enclosure that would prevent splashed residue from falling onto the floor below. Here’s the result of one of […]

Carmen Shead
Absolutely splendid work on my Victorian marble fireplace surround and tiles which hadn’t seen the light of day for many years. The fireplace has taken on a new lease of life and made a huge difference to the room. Great result. Thank you

Wendy Doble
Alicia cleaned my patio yesterday, and excellent job, no mess was the best for me. Very nice friendly lady, excellent customer service. Highly recommended, for sure I will use her again. Thanks

Joyce Tyler
Thank you for the outstanding results; we had not anticipated such a dramatic difference in the state of the floor before and after the polishing. We admire our marble floors everyday now and wish we'd known you years ago! You've been very professional and... Read More »

Steven Scott
We cannot rate Alicia and team highly enough! We had damaged our marble seating area and sandstone patio after we painted our fence with a stain oil which splashed onto, and penetrated, the marble and sandstone and marked them extensively - even through a... Read More »

Steve Bryson
I have the option of clicking on "Good quality" "Good value" "Professional" "Responsive" and "On Time." This company is all of those and so much more. Someone cleaned our marble floor with bleach. This wasn't a good thing, the marble absorbed it and discoloured resulting... Read More »
5 23
Tile Cleaning Agents Ltd
9, Crossways, Silwood Road, Ascot SL5 0PY, UK 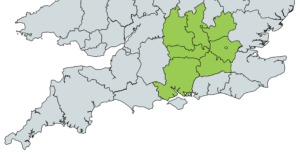